The SKA and its pathfinders will allow, for the first time, a direct study of the HI content of galaxies and its role in galaxy evolution over cosmologically representative volumes and over significant cosmic time.

Understanding the complicated interaction between the gas content of galaxies, their environments, and other major galactic constituents, remains a largely unsolved problem. In anticipation of the next generation of observational programs, current simulations of cosmic evolution now increasingly provide measures of gas content and its phase breakdown (atomic, molecular, ionized), and numerous models have been advanced for the fundamental physical processes that underly the observable gas scaling relations. These models must now be tested, and our observational understanding of evolution in the scaling relations improved to advance the field.

The advantages of alignment between HI and optical spectroscopic programs are many-fold: a comparison of gas content with high fidelity measures of environment and halo mass from optical spectroscopy, metrics that are imperfectly traced by HI galaxy redshifts alone due to the strongly anti-biased nature of this population; improved treatment of issues such as galaxy confusion, satellites, and multi-wavelength counterpart identification due to the comparatively higher spatial resolution of optical data; optically motivated source finding to increase the size of HI source catalogues; and the maximal exploitation of deep HI data through the application of statistical techniques, such as HI stacking, that increase the cosmic baseline over which evolutionary measurements of gas content can be made. Optical redshift catalogues further enable the properties of the gas-rich population to be directly compared to the general galaxy population as selected by tracers much more closely linked to stellar and halo mass.

While the current generation of optical redshift surveys are well-suited to the SKA pathfinders, such datasets are absent for SKA phase 1. In particular, SKA1- mid is expected to survey a 100sq deg region (i.e., comparable to WAVES-Deep) out to z ∼ 1 and beyond. No such dataset currently exists, being too expensive in telescope time for current facilities, and a unique opportunity for VISTA that will be met by WAVES. Combined with data from SKA phase 1 and Euclid, WAVES-Deep will enable robust measurement of HI over half the history of the Universe, and unique measurements over cosmologically representative volumes of the complex interplay of gas content with other major galactic constituents. 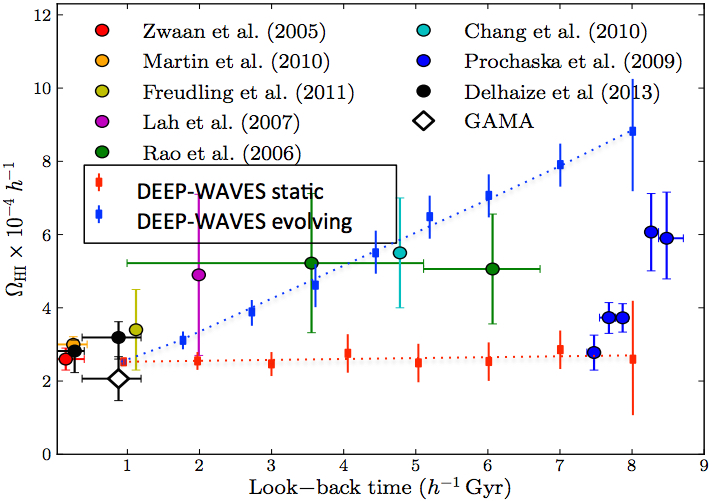 Predictions for the WAVES-deep + SKA-mid measurement of the Universal HI density as a function of lookback time.