Design accurate as of April 2019

The current survey design for WAVES-Deep covers a  total of ~70deg2 in five regions, to a selection depth of Zmag < 21.25 and upper photometric redshift cut of zphoto < 0.8. These five regions consist of 50deg2 in the GAMA 23h field (WAVES-deep23) and four single 4MOST pointings, ~4deg2 each, in the currently declared LSST deep-drill regions (ELAIS-S1, XMMLSS, ECDFS, COSMOS) –  WAVES-deepDrill.

The survey will probe SDSS/GAMA-like population statistics out to z~0.8, observing ~0.7 million galaxies (greater than an order of magnitude larger sample size than current surveys of comparable depth). All regions are designed to fall within the Euclid, KiDS-S/HSC/LSST, GALEX and H-ATLAS observations to provide UV – FIR imaging for all 1M galaxies. WAVES-deep-G23 will be aligned with the ASKAP-DINGOS deep field and we align WAVES-deepDrill with the LSST deep-drill fields to provide synergy with contemporary deep imaging surveys, and to maximise legacy value. 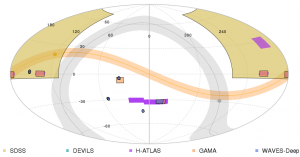