WAVES is a massively multiplexed spectroscopic survey of 1.6 million galaxies due to commence on the VISTA telescope as part of the 4MOST Consortium’s suite of surveys. 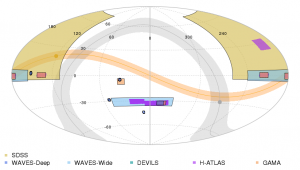 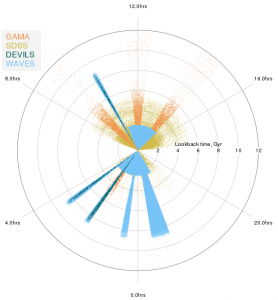 WAVES will provide a comprehensive and highly complete study of the galaxy populations extending to the lowest possible stellar and halo mass and flux limits locally, and to the greatest depths.

A key factor in designing WAVES is its potential for synergy with existing and upcoming facilities, including GALEX, WISE, Herschel, and in the future with additional complementary datasets from Euclid, LSST, SKA-mid, ASKAP and JWST.

The current survey design is fluid and will remain so until operations commence, but at this stage is proposed to comprise of three distinct sub-surveys WAVES-Wide, WAVES-Deep and WAVES-High (high S/N component within WAVES-Deep). WAVES-Wide covers the KiDS/VIKING  regions, which WAVES-Deep covers the GAMA 23h field and four single 4MOST pointings in the LSST deep-drill regions (ELAIS-S1, XMMLSS, ECDFS and COSMOS).

Whilst survey design is underway, readers should note that the numbers given here are rough guides.