Design accurate as of April 2019 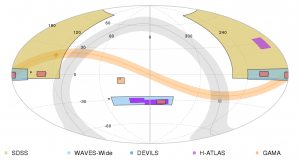 WAVES-Wide will be the definitive low-redshift reference survey for galaxy evolution science, probing galaxy evolution well into the dwarf regime in a representative sample volume of the Universe (3003 Mpc3) and a large variety of local environments. Amongst many science goals, WAVES-Wide will open up the regime of low-halo-mass galaxy groups (where most of the mass in the Universe resides) and large mass-ratio mergers (a critical component of the mass growth and feedback process).

Low-stellar-mass / low-halo-mass domains are critical for understanding the role of gas in the local Universe. HI gas is known to preferentially reside in such systems, and is biased against massive groups and clusters. As such, WAVES-Wide will offer the ideal survey synergy with next generation large area ASKAP (e.g. WALLABY and EMU) and SKA surveys.

Over the coming years the precise survey design will evolve, but the key science aims will remain exploring the local low-mass Universe. As such, collecting the redshifts for the nearest lowest mass galaxies will be the over-riding design philosophy.